Read this overview of the RNA interference (RNAi) pathway. Learn about its applications and design considerations for gene silencing experiments.

RNA interference (RNAi) is a conserved pathway found in most eukaryotes where dsRNAs suppress expression of genes with complementary sequences [1, 2]. RNAi has become the experimental tool of choice for studying the effects of gene silencing.

Long dsRNAs are degraded by Dicer into siRNAs, which are usually approximately 21 base pairs (bp) long with a central 19 bp duplex and 2-base 3′ overhangs. In mammals, Dicer processing occurs in a multi-protein complex with the TAR RNA-binding protein (TRBP). The nascent siRNA associates with Dicer, TRBP, and Argonaute 2 (Ago2) to form RISC [3]. Once in RISC, one strand of the siRNA (the passenger strand) is degraded or discarded while the other strand (the guide strand) remains to direct sequence specificity of the silencing complex. The Ago2 component of RISC is a ribonuclease that will cleave the target RNA under direction of the guide strand. A schematic overview of the pathways involved in degradative RNAi is shown in Figure 1. Once the RISC complex is activated, it can move on to target additional mRNA transcript copies. This effect amplifies gene silencing and allows the therapeutic effect to last for 3–7 days in rapidly dividing cells or several weeks in non-dividing cells [4]. 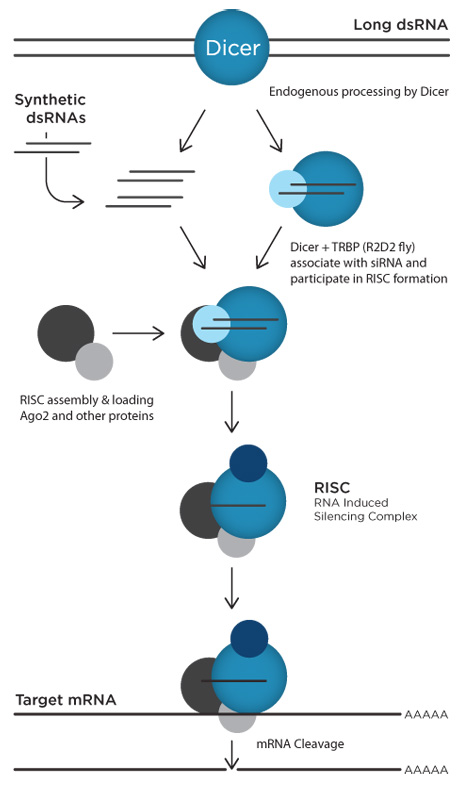 Using RNAi as a tool

Many researchers today employ synthetic RNA duplexes as their RNAi reagents, which mimic the natural siRNAs resulting from Dicer processing of long substrate dsRNAs. These synthetic RNA duplexes are transfected into cell lines and incorporated into the Dicer pathway. Although long (several hundred bp) dsRNAs are commonly employed to trigger RNAi in C. elegans or D. melanogaster, these molecules will activate the innate immune system to trigger interferon (IFN) responses in higher organisms. However, RNAi can be performed in mammalian cells using short dsRNAs, which generally do not induce IFN responses.

Traditionally, siRNAs are chemically synthesized as 21mers. Alternatively, researchers can use DsiRNAs (IDT) which are chemically synthesized 27mer RNA duplexes and have an increased RNAi potency of up to 100-fold when compared to conventional 21mer siRNAs [6]. DsiRNAs are able to effectively target some sites that 21mers are not able to silence [6].

DsiRNAs are processed by Dicer into 21mer siRNAs and designed so that cleavage results in a single, desired product. This is possible due to a novel asymmetric design where the RNA duplex has a single 2-base 3′ overhang on the antisense strand and is blunt on the other end; the blunt end is modified with DNA bases, shown in Figure 2. This design provides Dicer with a single favorable binding site that helps direct the cleavage reaction. Functional polarity is introduced by this processing event, which favors antisense strand loading into RISC. The increased potency of these reagents is thought to relate to linkage between Dicer processing and RISC loading [7]. Increased antisense loading will result in increased mRNA cleavage.

Figure 2. Design of a DsiRNA. The DsiRNA has a single 2-base 3′ overhang on the antisense strand and a blunt end modified with DNA bases (shown in lower case). This is processed by Dicer into an siRNA with symmetric 2-base 3′ overhangs on each end.

The ability of an siRNA to silence gene expression is predominantly determined by its sequence, and not all target sites are equal [5, 8]. In addition to the actual sequence, other considerations, such as cross-hybridization and chemical modifications, can alter the effectiveness of the siRNA [5].

Like targeted effects, off-target effects (OTEs) are dose dependent. Therefore, it is important to establish dose-response profiles for all siRNAs and always use the lowest concentration of siRNA that will provide adequate target knockdown. An additional measure to prevent OTE bias is to ensure that at least two, and ideally three, independent siRNAs against a target give the same result [5].

In Vivo use of siRNAs

Use of siRNAs in vivo shows great potential as both research tools and as therapeutic agents [11]. For more information on the status of RNAi in therapeutics, see the recent review by Vaishnaw et al. [12]. Before you begin RNAi studies in vivo, consider the following issues: site selection, compound design and chemistry, controls, route of administration, and use of a delivery vehicle [11]. To find the best candidates, it is very important to validate siRNA duplexes in vitro before moving on to in vivo experiments. In addition, choose more than one effective siRNA for each target to be tested in order to rule out false positive results caused by off-target effects [11].

For an example of research currently underway using RNAi in vivo to target the central nervous system, see the Your Research article, Using DsiRNA to map pain pathways in the CNS.

RNAi is a powerful tool for studying gene silencing and its effects. Here we have described critical design parameters, the importance of controlling for off-target effects, and considerations for in vivo gene silencing. Advancements to the technology, such as IDT DsiRNAs, have led to even greater advancements in the potency of RNA interference. Such tools will continue to provide the means to study the role specific genes play through the effects of silencing them. For more information on DsiRNAs from IDT, visit the Custom DsiRNA product page.

The antisense strand of the siRNA; will be incorporated in RISC

The sense strand of the siRNA; will be degraded

Guaranteed >70% knockdown by 2 of the 3 DsiRNAs in the TriFECTa kit. Controls provided.

Your DNA or RNA sequence, desalted, deprotected, up to 1 µmol in tubes or plates. Verified by mass spectrometry.

Use these programs to calculate Tm, identify secondary structure, optimize codon use, select siRNA, and more.